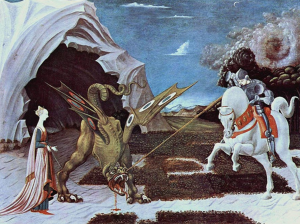 So, to start, something about this story that I didn’t know (which maybe I should have …) is that this part of the story of St. George’s life was actually brought back, as if by Crusaders from the East, and they Europeanized it (it’s a word). Basically they added the court stuff and the Romance tradition stuff, because that’s what Europe was all about at the time. The legend caught on in the Late Medieval Ages, and eventually became included in the Christian tradition of St. George. And not a terrible thing for a guy to have attached to his name, the title of dragon slayer. I wouldn’t be complaining, anyway.